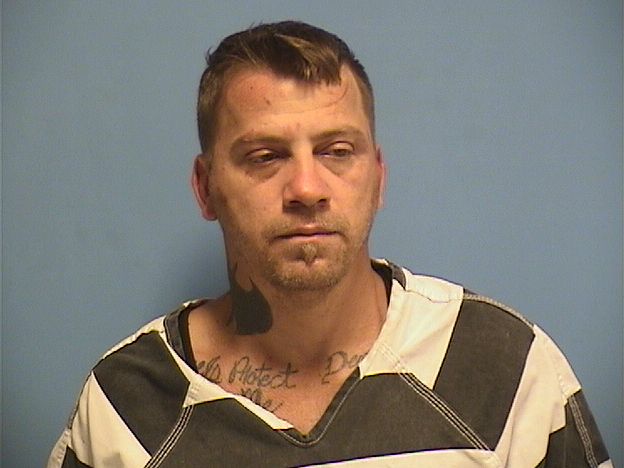 On November 30, 2021, a Mandeville man, who was known to have extensive violent criminal history, was taken into custody by the St Tammany Parish Sheriff’s Office Special Weapons and Tactics team. This incident took place in the 21000 block of Firetower Road in Mandeville.

At approximately 0900 hours, the St. Tammany Parish Sheriff’s Office Investigations Division, Property Crimes Unit, was notified of the possibility of stolen property being present at that location.

Ricker was known by investigators to have several outstanding arrest warrants.

Due to the nature of Ricker’s violent criminal history and the fact he barricaded himself inside the residence, Investigators requested the assistance of the St. Tammany Parish Sheriff’s Office SWAT Team for execution of a search warrant and to apprehend Ricker.

After attempts were made to have Ricker exit the residence and surrender were unsuccessful, the SWAT Team made entry into the residence and located Ricker hiding under a mattress. He was taken into custody without incident.

“Anytime we deal with a violent criminal and we successfully take them into custody without a Deputy getting hurt or the suspect being hurt either - that is a success,” Sheriff Smith stated. “We will utilize any and all of our resources available to ensure the safety of everyone.”

The St. Tammany Parish Sheriff’s Marine Division spent much of Sunday (Jan. 8) searching the waters of Lake Pontchartrain for a missing boater.  At approximately 8:30 a.m. Sunday the Causeway Police Department contacted the St. Tammany Parish Sheriff’s Office after a 12-14 foot Boston Whaler boat was found floating under the bridge near the 23-mile marker. The boat was unoccupied.  The registered owner of the boat told deputies a friend,…

The St. Tammany Parish Sheriff’s Office is investigating a shooting, which occurred Wednesday (Jan. 11) afternoon near the intersection of Nursery Street and Highway 36 near Abita Springs. One victim has been transported by ambulance to a local hospital. His injuries are unknown at this time. The incident is still under investigation, and more information will be provided when it becomes available. Anyone with information about the incident is asked…
Submit An Anonymous Tip »

Arrest Made in Wednesday Shooting Incident

A Covington-area man was arrested late Wednesday (Jan. 11) night in connection with a shooting that occurred Wednesday afternoon near the Abita Nursery Subdivision. STPSO deputies were dispatched to the area after a man called 911 to report he had been shot while driving near the intersection of Highway 36 and Nursery Street. Through their investigation, STPSO detectives learned Jacolby Howard (DOB 6/13/2002) was a passenger in another vehicle which…
Submit An Anonymous Tip »

Members of the STPSO Marine Division located the body of missing boater, Billy Coile, Monday (Jan 16) afternoon approximately 3/4 of a mile offshore near Green Point. The body has been turned over to the St. Tammany Parish Coroner’s Office, who will make a determination on the cause and manner of death. Sheriff Randy Smith offers his condolences to Coile’s family and his sincere appreciation to the STPSO Marine Division,…

After St. Tammany Parish Sheriff’s detectives located fentanyl-laced marijuana during a traffic stop, Sheriff Randy Smith is reiterating his warning to residents the only safe drugs are those prescribed by a doctor or purchased at a pharmacy. At approximately 8:30 p.m. Friday, STPSO Narcotics detectives were patrolling the area of the Abita Nursery Subdivision in Covington when they observed a purple Dodge Challenger driving erratically through the neighborhood and initiated a…
Submit An Anonymous Tip »